"It is important to realise what human beings are capable of"

Twenty-nine years ago, amid the ruins of a country torn apart by a brutal and bloody war, Oggi Tomic took his first breath. Born with water on the brain and left abandoned by his mother in the delivery room, Oggi didn’t exactly get the best start in life. In and out of orphanages for much of his childhood; the 29-year-old would face near-starvation, shelling and unimaginable suffering almost daily. “The windows of my orphanage were ambridovered with United Nations plastic covers because all the glass had been smashed. We didn’t have any door frames because everything was burnt to keep us warm,” Oggi remembers. “You steal things, break into people’s homes, steal cars and take drugs. If you didn’t get into crime, then you would get into drugs. “A lot of the orphans have ended up in prison or overdosed on drugs – I consider myself very lucky.” Against the odds, Oggi escaped that fate. Thanks to the orphans charity Hope and Homes and the George family, who witnessed the plight of Bosnian orphans on the news, aged 15 Oggi left Bosnia and came to Cambridge to study English at the Cambridge Language and Activities Course (CLAC). They took him under their wing and Oggi has made his life here, marrying his wife Aggie and forging a career as a successful photographer and filmmaker, working for the likes of the BBC and Kellogg’s. And now, 14 years after that life-changing move, Oggi has scooped two Bafta Scotland New Talent Awards for his film Finding Family. It’s the kind of story worthy of a Hollywood blockbuster. “We initially planned to film a documentary on the 20th anniversary of the siege in the Balkans,” says Oggi. “We wanted it to be a portrait of the Sarajevo people, of their childhood growing up in a war zone.” But when Oggi’s long-lost family made contact, it took a rather more profound turn. “It turned out we had an equally powerful story of my search for my mother who left me 29 years ago,” he explains. “Children from the Balkans are often discouraged from looking for their real families. But actually something inside you wants to. I just wanted to know why my mother did what she did; I didn’t want to get anything from her. I wanted to close that chapter of my life; to stop thinking and worrying about it.” Shot during a hot Sarajevo summer in 2012 by Oggi’s good friend and fellow film maker, Chris Leslie, Finding Family is a powerful, honest and heartfelt film; documenting not only Oggi’s quest to find answers, but Bosnia’s too, 20 years on from the gunfire which killed thousands of innocent people. “It’s a film for the people of Sarajevo,” Oggi tells me. “Cambridge is my home, but Bosnia is where my heart is.” Using over 15 years’ worth of photography and film archive, plus observational footage and interviews; the film follows Oggi on this life-changing journey, from the orphanage where he was abandoned to his family’s front door. It pulls no punches. “It was unplanned and unscripted. Things happened as they happened and I just told Chris to roll the camera,” Oggi says. It has received great acclaim. As well as those two Baftas for Best Factual and Best New Work, it has appeared at various film

festivals, and raised £35,000 to help orphans all over the world. “I thought it would just be for me but it’s been amazing how much of a success it has been,” smiles Oggi. “To win the awards left me speechless – I would never have imagined it could have happened to me. I hope the people who watch the film feel inspired, and see that they can achieve things in life they never thought they could achieve.” Although he admits to feeling incredibly proud of the film, the journey back to Bosnia was not an easy one for Oggi to make, and there were many bumps along the way – all of which, of course, were captured on camera by Chris. “My so-called uncle told me with pride that they were involved with the war, and weren’t on the Bosnian side but in the Serbian army. I was on the Bosnian side and one time I was captured by the Serbian army when I was trying to run away from the orphanage. It was shocking for me to find out my family were killing their own countrymen.” The moment he meets his mother for the first time in 27 years is also heartbreaking to watch. Did it give him the closure he was searching for? “I think it was very therapeutic. It was important for me to make the journey and understand my background and understand who the people were responsible for me being in four different orphanages. Why they didn’t come to visit me at all,” he says. “It wasn’t about right or wrong. It was closing the chapter of my life and moving on.” What was the hardest part? “Visiting the orphanage I grew up in,” says Oggi without hesitation. “It was an unimaginable feeling and I couldn’t hide my frustration and anger – it was really, really hard. “Orphanages are not a place, I believe, a child should be belonging to. They shouldn’t exist. To see a room designed to have four beds and no more – and we counted 12 beds lying next to each other – and baby cots where adults of 18 are sleeping, was really hard. Whether you’re a man or a woman, emotional or not emotional, something inside you says this is not right.” The film premiered at Sarajevo Film Festival last summer and Oggi invited hundreds of children from his old orphanage to come and watch. It must have been a wonderful moment? “Yes,” Oggi smiles. “But I closed my eyes and just cringed throughout – it was really difficult to watch. Not just watching my ugly face, it was just hard because I made the film to close that chapter of my life but then watching the film again opened up all the old wounds and I felt angry about it, and I didn’t want to, I wanted to feel proud.” Oggi praises his friend and “brother” Chris for helping him through the dark times along the way. “I wouldn’t have been able to make the film with anyone else,” he says. “I needed somebody who was close to me and understood me. I see him as my brother.” The story behind the pair’s friendship is a rather poignant one; they met 17 years ago when Chris was scrubbing a toilet floor at Oggi’s old orphanage. “He came with Hope and Homes, a 22-year-old Scottish guy just out of college,” Oggi remembers. “He got a post to teach photography and I found him cleaning a flooded toilet, trying to turn it into a darkroom. I took the

brush and told him: ‘You don’t clean like that!’” The cheeky teenager and Scottish student formed an unlikely friendship. “I told him if you buy me a Cola and Cevapi, I’ll take you around the city and keep you off the landmine fields. I just wanted to learn English – although it was quite hard to understand his Scottish accent,” Oggi laughs. Oggi and Chris are currently in talks with broadcasters and film festivals about more screenings (“I’d love to show it at the Cambridge Film Festival – without this place, it wouldn’t have been possible”) and also have plans to collaborate again on another project in Bosnia. Back when he was an orphaned boy growing up in the Sarajevo rubble, could Oggi ever have dreamed it would be his name on a film’s rolling credits? “Never,” he smiles. “I consider myself very lucky and very proud. “This film is dedicated to the children living without families across the world. I hope it will inspire them to achieve what they want in life. Be it a scientist, journalist, photographer. Whatever. They should never give up.” :: For more information about Oggi and to see the Finding Family trailer, visit the website at http://www.oggitomic.com/portfolio-item/finding-family/ 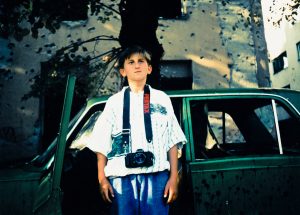 Listen to the podcasts Arts Round Up Episodes 17 and 35