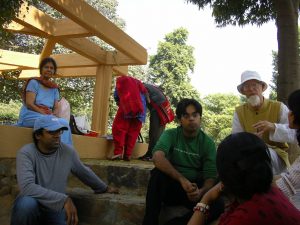 Rani Drew is a Cambridge-based Indian born professor, stage director, short story writer, poet and playwright and has written over thirty feminist plays.  Rani taught theatre studies Hungary and her plays ‘Shakespeare and Me’ and ‘The Three act Hamlet’ were performed in Hungary and won prizes.  Rani has staged a number of her productions in London and Cambridge and also does readings at Cambridge University and has written a number of radio plays .

Though it is true to say that men often find dealing with ardent feminists partly a traumatic experience, this is certainly not true of Rani whose intelligent and kind personality tackles often thorny issues of inequality, conflict between the sexes  and exploitation by making them funny and engaging. As a situationist she often turns the world we recognise on its head in her drama asking us to look at it from a female perspective, which is often surprising, hilarious, new and outlandish and a little confusing because you don’t know where its going at first. Looking at the world through her eyes we ask ourselves

I read somewhere that Rani purposefully ‘problematises’ feminism and she does it in a way that entertains audiences and I found working alongside her doing lighting for ‘The unsung heroine of the double helix’ a play about Rosalyn Franklyn’s largely overlooked contribution to Crick and Watson’s triumph with the Double helix, that she is inventive, driven and highly knowledgable about what works on stage and in a dramatic plot.

She is great to work with, full of inspiration, inventiveness and willingness to experiment with each actor and scene, thinking on her feet and making her world come to life.  These are plays about women told with humour and wisdom and they deliver her messages and insights into how typical situations and expectations thwart female intelligence and need to be challenged and changed to let true feminine light be seen and understood.

Having travelled widely in China, India, Hungary, Romania, Macedonia, Spain,   Mauritius and many other countries where she has staged plays abroad to great success, Rani draws on her experiences to create settings we both either don’t recognise, in being exotic, or alternatively we have a good knowledge of like Shakespeares plays and she’s uses those as backdrops for her drama and to set up the target assumptions and expectations that she is going to challenge, overturn and attack, of what might happen, only hinting at the starting point of the plot, and then does something surprising and unexpected with the contentious situations she’s laid in place for you.

The themes are women’s struggles to come out on top in challenging scenarios throughout history an in many countries, settings and cultures, and also literature, and to recreate key moments play them in slow-motion and analyse the interactions with her drama to make her feminist points.

This process asks a lot of questions about why the world is the way it is between men and women and is it the fault of men and society ….and couldn’t we imagine a better set of circumstances where women would be freer and happier and more creative. Imperialism in India’s past, racism, the historic treatment of women and the relationships between people and animals, being held as similar in some ways, are favourite settings for her plays.

I was invited to do lighting for her play the Unsung Heroine of the double helix which told the story of Rosalind Franklin whose contribution to the historic discovery was largely overlooked. Heres the cast after what was an engaging play that went down well with audiences. 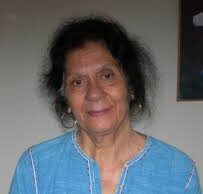 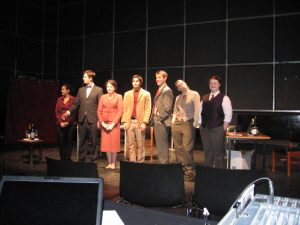 The cast of The unsung heroine of the double helix 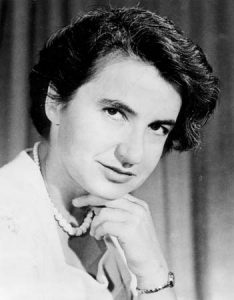 In her book The Dogs Tale an orphan puppy called Bela is raised by a young woman and her mother in the Buda Hills overlooking Budapest. After growing up happily in the world a great misfortune occurs prompting an epiphany moment where a great decision must be made.

What is going on behind a dogs eyes is the at the centre of it and how an animal possibly sees the human world, and moving the idea forward a subtle undertone looks at the distance between men’s understanding of the world and a woman’s view point a device Rani often uses to say how the treatment of women and animals has some similarities at times. The plot also draws on Buddhist Jatakas, Indian Panchtantra, Kafka and the tale of Chinese Zodiac.In her play The descent of Bot humans have polluted and ruined the world beyond habitability and are leaving to another galaxy to colonise it. All that left are five  robots who don’t want to be like people and  this set up her critical payload of why they don’t.

Rani’s analysis classic scenarios in literature and often finds opportunities to question them to make her brand of drama through a stencil made by a famous writer. She saying in a kind of screenshot “stop right there! “to the writer, “I’ve got something to say about this one. Imagine this very same drama if this happened instead, and these are all the feminist issues with it we should be looking at in 2020”.

Her hypothetical situations tackle stereo types and seek to express enlightened alternatives. She isn’t at all afraid of rewriting Shakespeare to take advantage of his characters scenarios and women characters and re-position them in her parallel drama in plays like Shakespeare reformed and Caliban.

Her brand of  drama is provocative, funny and palatable but sometimes hard to follow because it attempts to break new ground intellectually in the tangles of her mind. Rani is also widely published in magazines in Canada the US and UK

Listen to the podcasts in Arts. Round Up Episodes 12 and 24 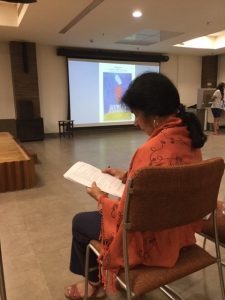