The Children of Calais – A new public Artwork by Ian Wolter. The sculpture echoes The Burghers of Calais by Auguste Rodin and is designed to  provoke debate about the inhumanity of our response to the children caught up in the ongoing refugee crisis.

Rodin’s original memorises a moment during the hundred years war when Calais was under siege by England for over a year and King Edward offered to spare people of the city on condition that six of its Burghers would surrender themselves.

Ian Wolters sculpture evokes a parallel narrative: the sacrifice being demanded of child migrants for our ‘greater good’. Dressed in contemporary clothing, one of these figures holds a lifejacket in place of the city key held in Rodin’s original.

Artist and sculptor Ian Wolter previews his emotive ‘Children of Calais’ sculpture to be unveiled by Lord Dubs.
http://ianwolter.com

The Art Hound Gallery’s Natasha Dawn explains why Pop Art is selling beer than ever and invites us to a city centre pop up exhibition.
https://thearthoundgallery.com

Listen to the podcast Arts Round Up Episode 37 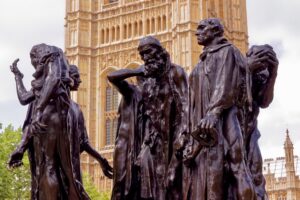