'The Spy who Loved' "It's a story about an incredible woman that has to be told...

Clare Mulley is an award-winning author and broadcaster. Her first book, The Woman Who Saved the Children, won the Daily Mail Biographers’ Club Prize, and The Spy Who Loved, now optioned by Universal Studios, led to Clare being decorated with Poland’s national honour, the Bene Merito. Clare’s third book, The Women Who Flew for Hitler, tells the extraordinary story of two women at the heart of Nazi Germany, one of whom tried to save Hitler’s life, while the other was involved in the most famous assassination attempt on him. Clare reviews non-fiction for the Telegraph, Spectator and History Today. A popular public speaker, she has given a TEDx talk at Stormont, spoken at the Houses of Parliament, Royal Albert Hall, Imperial War Museum, National Army Museum and British Library, as well as many festivals. Recent TV includes the BBC’s Rise of the Nazis, the BBC D-Day 75 coverage, Newsnight, Channel 4’s David Jason’s Secret Service, and Adolf & Eva, Love & War for Channel 5. www.claremulley.com

The Spy Who Loved. The secrets and lives of Christine Granville, Britain’s first female special agent of WWII
By Clare Mulley
In June 1952, a woman was murdered by an obsessed colleague in a hotel in South Kensington. Her name was Christine Granville. That she died young was perhaps unsurprising, but that she had survived the Second World War was remarkable.

Listen to the podcast Cambridge Arts Round Up Episode 30

The daughter of a feckless Polish aristocrat and his wealthy Jewish wife, she would become one of Britain’s most daring and highly decorated special agents. Having fled to Britain on the outbreak of war, she was recruited by the intelligence services long before the establishment of the SOE, and took on mission after mission. She skied into occupied Poland, served in Egypt and was later parachuted into occupied France. Her quick wit, courage and determination won her release from arrest more than once, and saved the lives of several fellow officers, including one of her many lovers just hours before he was due to be executed by the Gestapo. More importantly, perhaps, the intelligence she smuggled to the British hidden inside her gloves was a significant contribution to the Allied war effort and in recognition of her success she was awarded the George Medal, the OBE and the Croix de Guerre. Charismatic, difficult and fearless, Christine was an extraordinary woman, and exercised a mesmeric power of those who knew her.

Clare Mulley is the author of The Woman Who Saved the Children: A Biography of Eglantyne Jebb (Oneworld, 2009), which won the Daily Mail Biographers’ Club Prize. 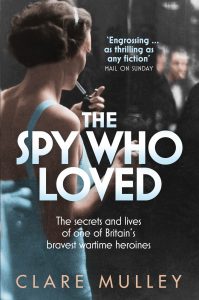