War and trauma in art

Policing an ever more uncertain and dangerous world is one of the most demanding and stressful  occupations life can throw at you. The world sadly needs soldiers to tackle hotspots and the terrible cost of war leaves many men broken and traumatised and often silenced by their experiences when they return home to civilian life. The whole topic of what happens next in their lives is an ongoing problem as they are often discarded and disregarded by society.

So Can taking up a creative career decompress them and help them to live again and get over mental injuries?  And what kind of art develops from that?  I’ve been talking to Cambridge Artist Julie Kim Rossetter who is concerned with themes of conflict and the effect it has on the human mind and family relationships. Post traumatic stress disorder is not confined to soldiers but most often found in them.

Her photographic-based work looks at war and conflict zones around the world and the devastation of landscapes, cities and communities, much of it it through arial or satellite photo footage she’s legally procured via a website. She takes the photo’s and then works the images into art works using a range of techniques designed to enhance them strikingly and express a eye in sky view of conflict zones.

Her now deceased ex-partner was an SAS Falklands veteran and she herself came from military family having worked in military procurement herself before resigning over ethical issues. She says the trauma men bring back from the war zone in terms of Post Traumatic Stress Disorder is often hard to live with and can lead to domestic violence. Having herself had an horrific car crash involving a brain injury and PTSD she felt uniquely able to examine the subject because of her own experiences.

She became very concerned when her son Leon decided he’d like to join up to the army and in a bid to dissuade him she introduced him to the works of war poet Signified Sassoon and also Wilfred Owen. The subject matter sparked her current PHD which she’s currently completing and lead to some remarkable discoveries about Sassoon and the war psyche in Cambridge Universities archives. 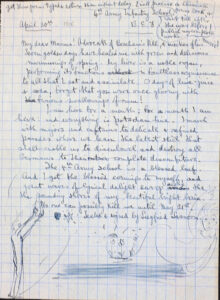 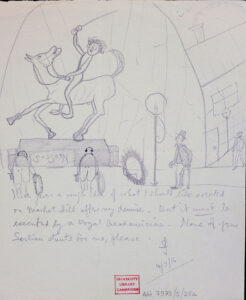 Listen to Art Round up 42 ( second half) 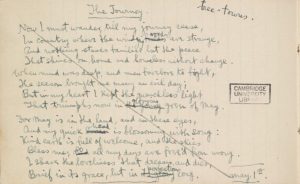 At the Grave of Henry Vaughan

Above the voiceful windings of a river An old green slab of simply graven stone Shuns notice, overshadowed by a yew. Here Vaughan lies dead, whose name flows on for ever Through pastures of the spirit washed with dew And starlit with eternities unknown. Here sleeps the Silurist; the loved physician; The face that left no portraiture behind; The skull that housed white angels and had vision Of daybreak through the gateways of the mind. Here faith and mercy, wisdom and humility (Whose influence shall prevail for evermore) Shine. And this lowly grave tells Heaven’s tranquillity And here stand I, a suppliant at the door.